Our Cellarmaster, Carl Schultz, has long been a passionate advocate of working with nature, and since he arrived at Hartenberg in 1994, he has overseen many of the projects implemented to harness and protect the natural resources of Hartenberg.

This is fully in alignment with the Mackenzie family, owners of the estate since 1986, who strive continuously to safeguard Hartenberg and their philosophy to “leave Hartenberg in a better condition than when we started”.

Hartenberg’s holistic approach encompasses all aspects of the farm, including everyone who lives and works here. 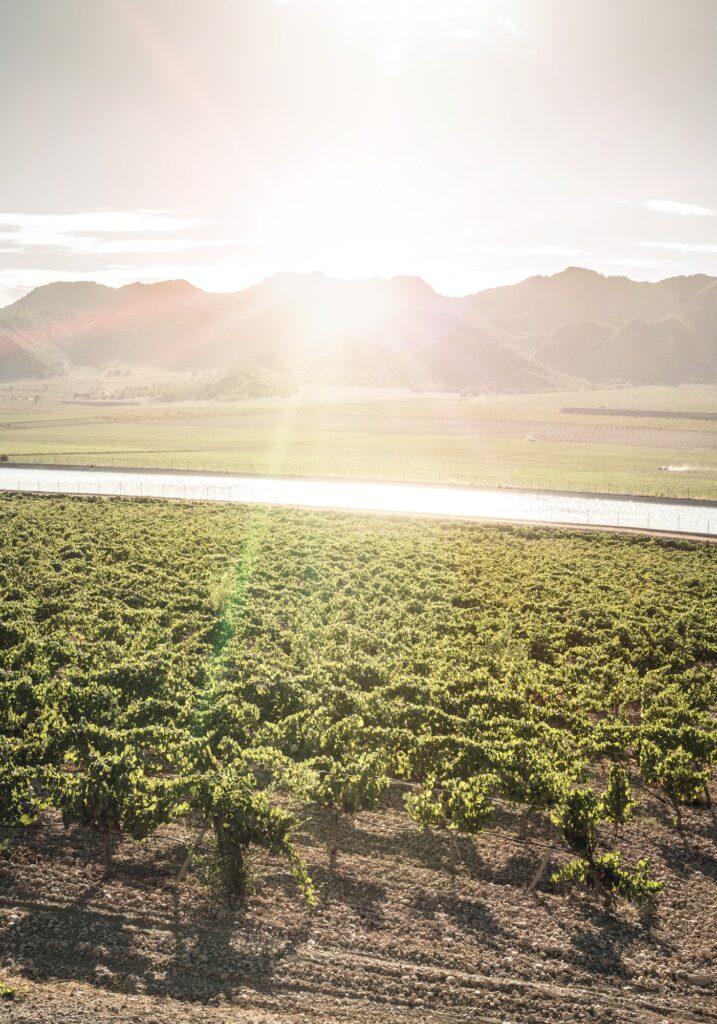 Our estate is around 170 hectares of which 65 hectares is an extensive wetland, comprising indigenous plants including bullrushes which are renowned for their fibrous root systems that are natural water filters.

Over a period of a decade, starting in 1995, we removed copious amounts of alien trees from the wetlands, including Syringa, Black Wattle, Blue Gum, Pine, Port Jackson and Sesbania. This has led to increased soil water levels and longer run-offs after rain, and has allowed the indigenous plants to thrive.

The protected wetland area attracts a large variety of birds (85 species in total), buck, wild cat and linx. Two of the best indicators of successful sustainable farming and an absence of pollution in the Cape are the presence of frogs and Cape Francolin and we are delighted to have an abundance of both.

Hartenberg is blessed with water from 5 springs that flow from the top of the Bottelary Hills. Careful management and investment in protecting this resource means we have never, in over 300 years, needed to connect to mains water.

The spring water is of a very high quality and flows through a network of pipes around the estate to where it is needed. Almost 2 decades ago, Dr Eric Smollgruber, an Austrian aquatic engineer, advised Carl on how to improve our waste water management to ensure that every drop is reused.

We recycle all the waste water from our cellar, tasting room,  restaurant and houses on our estate.

Water can generally be split into 3 catagories:

Waste water gravity-flows to a 2000 litre holding tank in a filter house, installed in the late 1990s. Each time the tank is full, water then flows to a series of 6 gravel pits. Each pit is 4 x 4 metres in size with a bed of grey granite stone approximately 19mm in depth. The pits are flooded with water from the holding tank several times a day.

We do not dose the waste water but an initial screening removes or reduces solids as small as 2mm or even less.  Millions of natural bacteria sit on the surface of the rough gravel in the stone pits and start to break down the organic load.

The semi-filtered water trickles through the granite gravel and then overflows onto a peat layer of around 32 to 50 cm in depth. Underneath this peat is a deep clay layer (a minimum of 1.5m in depth) which stops the artesian water layer being contaminated.

The water gravity-flows through the wetlands through a reedbed system over a distance of 2 to 2.5km and as it does so, natural bacteria and plants filter the water, removing sediment and toxins. Monthly water samples are analysed by the Department of Water  to ensure the process is working correctly.

By the time the water has passed through the wetlands to our main irrigation dam it presents crystal clear in a glass. This water is then used to irrigate our vineyards and gardens. Hartenberg’s water has been a closed system for 15 years; the water reused over and over again.

A key question we ask ourselves regularly is “what waste are we generating?” and then we look for solutions.

As a business we generate waste in our restaurant and cellar. Our solution is to recycle all food waste from our restaurant along with grape skins and stems from the cellar to make compost, which in turn is used to nurture the health of our soils.

In order to recycle our waste efficiently all year round, we looked at various options from around the world and settled on the Green Genie unit from Jora, Sweden . This insulated composter is capable of breaking down not just fruit and vegetable matter, but meat too.

We add sawdust to the composter as it is carbon-rich and feeds the microbes, causing the decomposing matter to heat up to around 65 degrees Celcius, which breaks down the food scraps into odourless, soil-like matter. This process takes 4 weeks in summer and 6-8 weeks in winter.

We currently produce around 200kg of compost per week in summer and 50 – 100 kg in winter, which is then applied to the gardens as a mulch. One point to make is that fynbos, indigenous to the Cape, does not need any mulch, showing how suited it is to the region.

Copper is allowed in organic wine farming (0,4gm per litre) and is used in vineyards to control downy mildew, but we have chosen not to use it at Hartenberg. It is a heavy metal and bad for the micro-organisms and life in our soils. It is the most common pesticide residue found in organic products but is known to be harmful to all life forms.

Hartenberg is farmed organically and  adheres to the IPW (Integrated Production of Wine) scheme codes of conduct which focus on sustainable wine production. The Integrity & Sustainability seal, which can be found affixed to the neck of all our wines, guarantees consumers and buyers that we have produced our wines in an environmentally responsible and sustainable way. Compliance with the IPW guidelines is assessed annually and audited independently.

Leafroll Virus is widespread in South Africa, having become a problem back in the 1970s. The virus is carried in the saliva of the female mealybug who bites vines and infects them with the Leafroll Virus. Whilst the vines survive, their ability to produce sugar and thus ripen grapes is affected, which leads to reduced quality.

In the past the solution was to spray the vineyards chemically to kill the mealybugs. This had the unfortunate effect of also knocking out the natural predators and the mealybugs, as a result of producing up to 15 ‘litters’ a year,  thrived and multiplied rapidly. 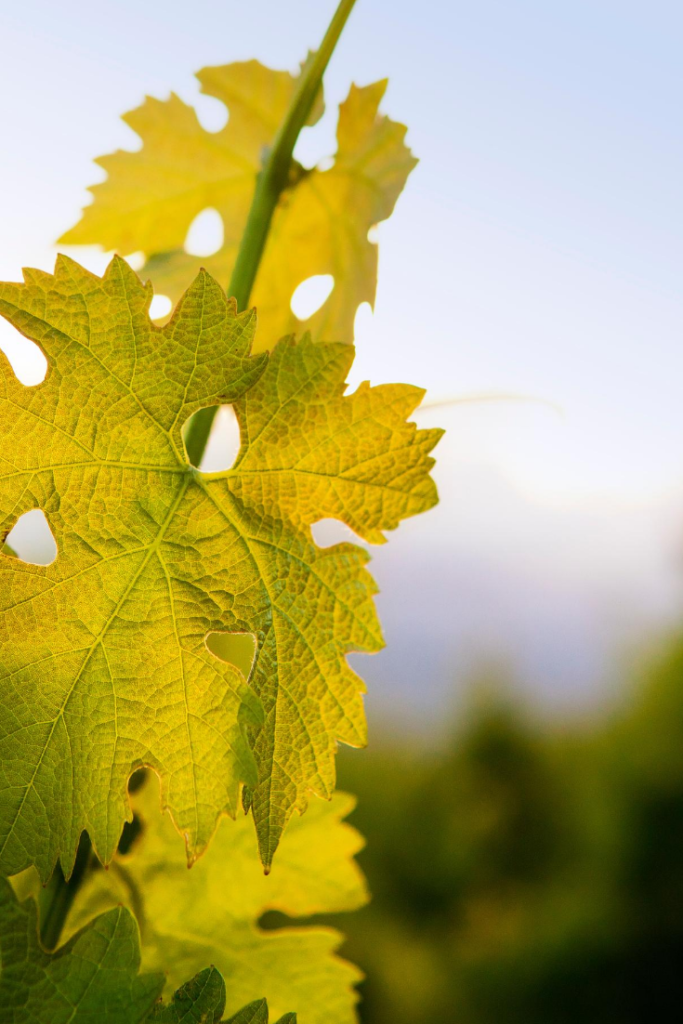 In 2003, Hartenberg sought a natural solution which is still deployed today, if needed. A simple pheromone trap, (set 1 trap per 4 hectares), is used to monitor the number of winged male mealybugs in any given vineyard.  The males, almost invisible to the naked eye, have a lifespan of just 2 weeks and are drawn to the pheromone traps where they get stuck on a sticky mat. The traps are checked and the males are counted regularly; if there is an increase in their numbers, action can be taken.

BioBee is a South African company that supplies natural solutions in the form of insects that eat or kill pests. The first defence is the humble South African ladybird who attacks the female mealybugs and their pupae. The second defence is the Anagyrus or Perminutus parasitic wasps who hunt the female mealybugs. The combination of both of these predators ensures different stages of the mealybug cycle are disrupted before damage can occur. Hartenberg buys and releases thousands of these indigenous predators to naturally control mealybug numbers.

Using this green and natural solution has ensured our vineyards have remained free from Leafroll Virus for over 15 years to the present day, and we are confident that this will remain the case in the future.

Another way in which we harness nature is to encourage owls by providing nesting boxes on our estate.

Owls hunt rodents thus negating the use of bait stations in the cellar. Bait stations were a common solution starting in the 1970s to reduce rodent numbers but owls often then ate the poisoned rats and mice and died of secondary poisoning. As the owl population would decrease, the rodent numbers would escalate.

We currently have 9 breeding pairs of Barn Owls and Eagle Owls who are invaluable in controlling rodents and snakes, with the average Barn Owl catching 10 to 20 prey items each night.

Another way in which we are pioneering the conservation of water is through investing in sub-soil irrigation. This super-effective method comprises irrigation pipes that are buried in the ground so that water is drip fed directly to the roots of the vines, negating the water evaporation that occurs in standard above-ground irrigation. Hartenberg has also switched from daylight to nighttime irrigation thereby reducing evaporation by 10-20%.

To further reduce both soil temperature and evaporation, pruning cuttings are now placed on the undervine area of vineyards and we place organic mulch on the same area.

Hartenberg purchased the first Pressure Bomb Reading kit in South Africa in the late 1990s . Developed in California, this test allows a high level of accuracy  in determining the water needs of a plant and is the only instrument of its kind to measure levels of water in the plant as opposed to soil moisture levels.

The instrument comprises a small box containing a diaphragm into which a leaf, freshly picked around midday, is placed with the stem sticking out. Nitrogen pressure is then applied from a cylinder to the chamber and as the pressure increases in the chamber, sap is forced out of the leaf surface and in reverse, back up the stem. The pressure needed to push the sap out is the same as the pressure the plant needs to exert to extract water from the soil. From this reading a viticulturist can judge what amount of water stress the vine is experiencing and consequently the need to irrigate or not.

Vines are able to exert up to 16 bar of pressure when extracting water from the soil. To put this test into some perspective, it is interesting to note that the pressure of a vehicle tyre is 2 bar.

Bordeaux varietals have over time adapted to higher rainfall and are more water sensitive than Southern European varietals such as Cinsaut, Shiraz and Grenache that have become accustomed to semi-desert conditions.

These facts become important as we consider climate change and the long-term future of wine in South Africa.

Whilst vines are hardy plants, we use cover crops to improve our soils. Legumes bind nitrogen in the soil and make it available for the vines which aids growth and contributes to healthier grapes.

Wild Radishes are planted in the heavy clay soils of our Gravel Hill vineyard. They have big tuber-like root systems that push through the clay and when the cover crops die, the root system withers leaving hollow tubes that loosen the clay and allow ingress of vine roots.

We also plant Serradella pasture legume whose purple flowers attract bees. We have 30 hives on our farm and while our vines do not need bees for pollination, many other plants, including our fynbos, do. 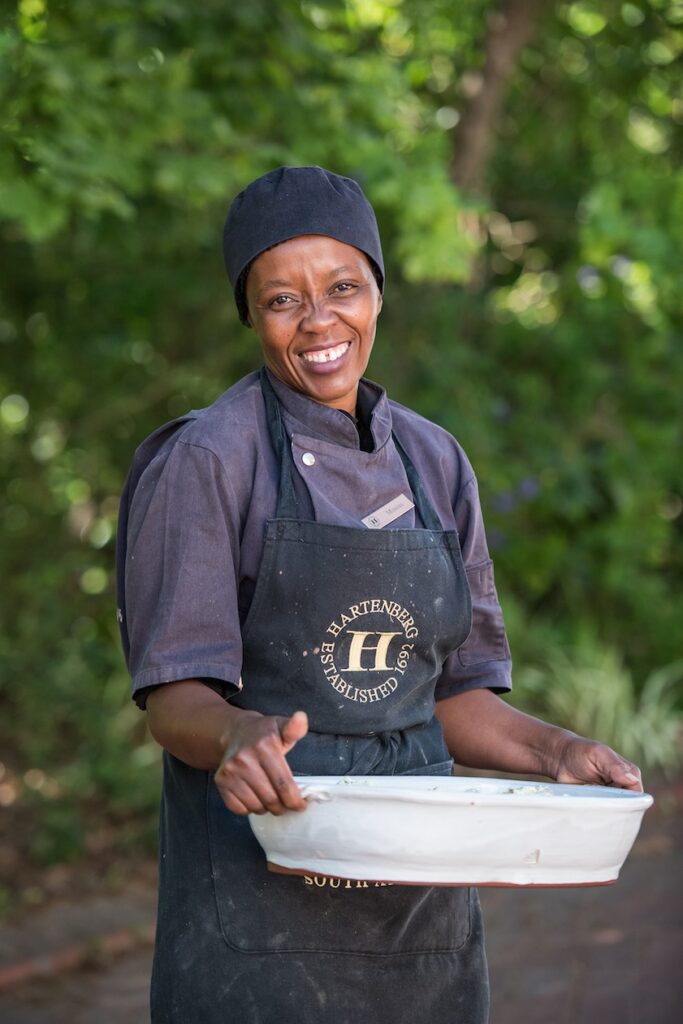 There is global concern for the welfare of workers employed in the South African wine industry. Hartenberg is a family-owned business and the Mackenzie family have a long history of retaining staff and uplifting their knowledge and skills.

Social commitment is valued with sponsored after-school facilities and adult literacy classes provided for our permanent cellar and vineyard staff. Staff are transported to and from work free of charge, and their children to and from school at the company’s expense, using buses from a local BEE (Black Economic Empowerment) company.

To quote our Cellarmaster, Carl, “wine doesn’t like change” and Hartenberg’s history of retaining staff ensures that the knowledge of our team grows each year, and this is reflected in the increasing quality of our wines.